Dundee’s Outplay has a new game in production. Alien Creeps TD is a classic tower defence game, in which players must defend the Earth against ravening hordes of heavily-armed, or possibly heavily-tentacled alien warriors, bent upon destruction and conquest. 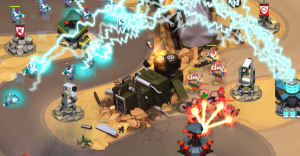 Earth forces are not unarmed themselves. Players command an arsenal of weaponry, created by mankind for this very reason. And certainly not to rain down fire and death upon other inhabitants of Earth. No sir. Not this planet. This is strictly for inter planetary, or inter galactic defence. We’re a peace loving species, you know. Though if you think you can take away our freedom, or halt progress and democracy, then you better get ready for a fight, because we’re also a freedom loving species. And we have awesome weapons, because we’re a weapons loving species too, so this is all great for the economy in the long run too. Everybody wins!

Tower defence games are a genre Scotland seems to have a particular talent with. In recent years we’ve seen titles such as Cobra’s iBomber Defense, Lucky Frame’s Bad Hotel and Ninja Kiwi’s Bloons TD all pick up awards, trophies, high scores, praise and places in annual ‘best of’ lists…

According to the lovely team at Outplay key features of Alien Creeps TD include:

You would think, naturally, that Outplay would be thrilled that they have another new game hitting the market. You’d be half right. Outplay President Richard Hare is exceptionally thrilled:

We are exceptionally thrilled to be able to announce Alien Creeps TD today. This tower defense game is packed with action and will keep gamers coming back for more, and with its crisp 3D graphics and quality gameplay, we’re honored to have our name behind it.

Alien Creeps TD is COMING SOON to iOS (iPhone, iPad, iPod Touch). It will be free to play. Together, we can turn back the hordes of tyrannical and despotic space invaders, blowing them into wisps of greasy alien smoke… For Earth, for freedom, for sunsets and kittens and rainbows, for the smiles on babies faces, companionship, joy, leafy green vegetables, hugs, increasing shareholder value and a chance to show off some seriously awesome weaponry to our would be conquerors. Briefly. Until they sizzle and disintegrate.