The 2014 Dare to be Digital competition launched today, fronted by the V&A museum’s first ever game designer in residence, Sophia George.

Sophia was a Dare to be Digital competitor back in 2011, as part of Team Swallowtail. The team not only won Dare to be Digital, but went on to claim the BAFTA Ones To Watch award. You can download the team’s winning game, Tick Tock Toys for Apple iPhones and iPads here.

Dare to be Digital is a unique and incredibly valuable game development competition, hosted and run by Abertay University. Hundreds of students apply to take part in Dare to be Digital every year. The challenge is significant. Teams must build a working game prototype in just eight weeks.

The games then go on show to the public – and industry experts in central Dundee in mid-August. The three winning teams then compete for the BAFTA Ones to Watch Award. 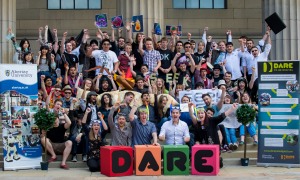 This year’s Dare welcomes teams from as far afield as China, India, Malta and the USA, who have travelled to Dundee for the duration of the competition.

Dare to be Digital was the first opportunity I had to work with a team to build a complete game, and it changed my life. All of the 15 teams who are spending the summer at Abertay University building a brand new game face an incredibly tough challenge, but when they put their games on show at the Dare ProtoPlay festival in August they will be ready for a career in games. I wish them all the very best of luck, and look forward to seeing 15 creative, exciting and inspiring games take shape over the next eight weeks.

Sophia is currently working at Abertay University, building her first game, inspired by six months of research in the V&A’s Britain 1500-1900 galleries in London. The game explores the designs of William Morris and lets each player create new patterns using Morris’s work. 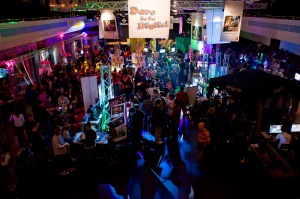 Abertay University has always been committed to giving students real-life experience for a career in the computer games industry, and Dare to be Digital is a great example of this. Many of these students won’t have had the chance to build a complete game before, but at the end of these eight weeks they’ll leave with a major piece of work and invaluable professional contacts.

All 15 student games – plus game from independent game studios – will go on show at the free Dare ProtoPlay games festival, Thursday 7 – Sunday 10 August in Dundee’s Caird Hall and City Square.