Scientists. From the amiable if eccentric lab-coated boffins of British fame, to the megalomaniacal  ‘Fools! I’ll show them. I’ll show ALL of them! Mwah ha ha…!’ Frankenstein-esque human centipede creators, they love meddling in things they ought not to. And if you’re meddling with things you ought not to, then clearly, second only to building a monster from human body parts, making stuff big is just awesome.

Whether it’s irradiated by a mysterious meteorite, or few a fiendish formula of their own devising, scientists, generally, totally get off on making things massive.

If the thing happens to be a junk-food obsessed cyclopean bipedal MONSTER, then clearly it’s a good day at the office. 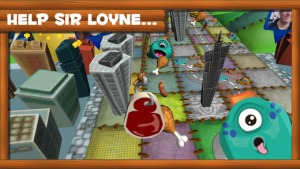 The fact that the unnatural creation will invariably break out of confinement and run amok, causing untold destruction, damage and death is just one of those things. One cannot stand in the way of progress. Unless one wants sewn into the middle of a human centipede.

So it is that the foolish physicists at Future Fossil have foisted a ferocious foodie freak upon the world. Yes, we know that ‘molecular biologists’ is more likely, but we find the alliteration awesomer.

High Steaks! is an endless runner with a difference. You, as a presumably panicking professor, are luring your lumbering leviathan through a lovely landscape, with a luscious lump of leg meat. Steak to be precise.

Swiping left and right causes your bait to swoosh left and right. The cyclopean horror will of course follow faithfully. The goal is to collect junk food and avoid big buildings. Minimizing collateral damage and civilian casualties and trying, presumably, to get your beastie to your secret lair, where you can shackle it, train it to obey commands and unleash it upon the world, unless the United Nations agrees to pay you… ONE HUNDRED BILLION DOLLARS! It’s a better scheme than your one for the trained killer bees. That was just stupid. We mean, really. What were you thinking?

The further you get, the more you score. Collect much meat to trigger the RAGE MODE, whereupon your meat-stuffed mutation can stamp and stomp buildings to its heart’s content. Hurrah! 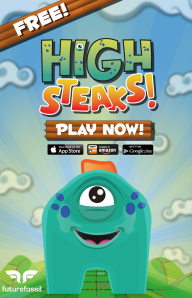 High Steaks! is OUT NOW. It’s free to play, with in-app purchases. This is Future Fossil’s first release and as such deserves your time and attention. Go on, give it a try… It has monsters and junk food in it.