If there’s one indie game we’ve been looking forward to over the last several months, it’s Gears Of Glory.  A technical top-down racer, the game offers players a more challenging experience than the normal zoomy, drivey, drifty type of arcade game. 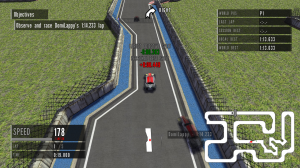 The handling needs to be learned, man.  You need to spend some time figuring it out and perfecting your technique if you’re going to shave valuable seconds off your lap times and hit those corners like a professional F1 or NASCAR driver (left hand corners only).

Despite the learning curve, Gears Of Glory is the very definition of pick-up-and-play.  Gamers can jump in for a single race, or start the sort of gruelling career that even Jensen Button would balk at, despite the yachts, glamorous lifestyle, cars, private jets, pneumatic fans and free top-of-the-range shaving requisites.  Domipheus Labs, the developer behind the game describes it as ‘casually challenging’ and we can’t come up with a better description than that.  You can jump in and out, you can pick up the controls immediately, but good GRIEF this thing will take some practice to master…

If you’re a fan of Forza, F1 fanatic or Gran Turismo groupie, Gears of Glory has the sort of gameplay to make you go gooey. 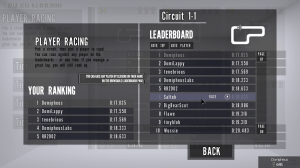 The game has some clever features which make even single player modes feel new, different and exciting.  Gears Of Glory features a Dynamic Opponents system, which pulls other, similarly ranked players, data from the cloud and uses that to show exactly where you stand in global rankings and ensure that every race and result makes a real difference in rankings.

Players can compete directly against other GoG drivers, either against their time and score status, or using that player’s data to create a physical opponent, whether that player is online or not.  So you can play against someone else’s actual performance while they’re driving on the same track, not as a ghost car.

Which means there’s no AI.  Every opponent in the game is a real player.  Which is rather cool.

There are no skill trees, purchase points or in-game goods.  Every player starts with the same car and controls, to eliminate any handicaps or players buying their way to glory.  The only way to succeed is to win.

There are multiple game modes which allow players to progress through hitting the fastest times on the various tracks.  There are currently over 25 tracks on the seasonal circuit, with a track editor promised for a forthcoming update. 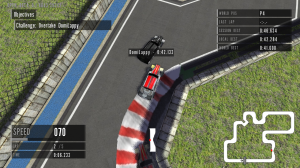 Players will be able to create and share their own tracks with other GoG racers and separate leaderboards for each new track will be offered, to allow gamers worldwide to compete head-to-head.

Gears of Glory: Apex Ace is one of those games which exemplifies the indie ethos.  An idea which has been carefully thought out, well realised and brought to life with a real passion and an eye for detail.

The game costs an incredibly reasonable £2, which is value for money to all but the most unjustifiably miserly non-PC owners.  Domipheus has gone even further however, offering a double pack (buy a copy for you and one for a chum) for £3.60 or a 4-pack (for the Mister Populars out there) at an astonishing £6.00.

If you don’t buy it, we’ll not only lose respect for you, but start vicious rumours and generally try to run you out of town.  Ya lousy bum.  People may well spit on your back and imply via gestures that you’re either mentally ill, or sexually deviant.  We don’t want that on our conscience.

Go and buy it.  If you’re not a PC owner, give it to a friend or loved one.  It would make a smashing wedding present or house-warming gift and is allegedly endorsed by Jeremy Clarkson.